Which Countries And Territories Make Up Melanesia?

Invitation to All Melanesians

A subregion of Oceania, Melanesia includes the four countries of Fiji, Papua New Guinea, Solomon Islands, and Vanuatu, and a few other territories of some countries. 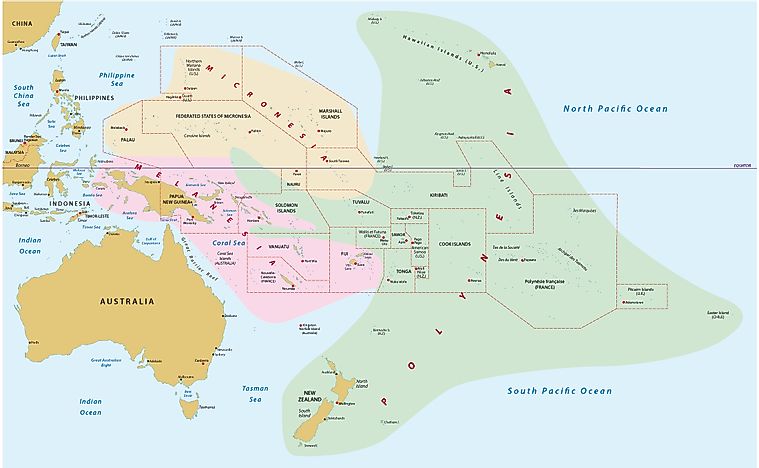 The three major divisions of Oceania: Micronesia, Melanesia, and Polynesia.

Melanesia is one of the Oceania’s sub-regions, stretching from the southwestern part of the Pacific to the Arafura Sea. The region comprises of several islands which cover a total land area of approximately 385,000 square mile. The Melanesia islands are home to over 13 million inhabitants and have been occupied for thousands of years. The region encompasses four countries including the Solomon Island, Fiji, Vanuatu, and Papua New Guinea. Also included in Melanesia are New Caledonia (which is a territory of France) and Western New Guinea (a region of Indonesia). The term Melanesia was used for the first time in 1832 by Jules Dumont d’Urville to refer to the linguistic and geographical groupings of the islands that were separate from Polynesia and Micronesia. However, Jules’s use of the term is today considered to be non-inclusive as it obscures the culture, language, and genetic diversity of the Melanesians.

The term can be used in both an anthropological and a geographical context. In anthropology, Melanesia is one of the subregions of Oceania whose population before colonization belongs to one ethnocultural family. Geographically, Melanesia is used to describe an area where political, linguistic, and ethnic identities are considered irrelevant. The term also combines two distinct groups of people: Austronesians, and Papuans. Geopolitically, Melanesian Spearhead Group Preferential Trade Agreement is one of the trade treaties involving the countries within the region. The European Explorers have described Melanesia as a unique cultural area rather than racial. Other historians and Scholars have disagreed on the extent of an area defined by the term (Melanesia) with the uncertainty continuing into the present century.

Melanesia is composed of nearly 2,000 islands who cover a total area of approximately 385,000 square miles. The islands are home to over 12 million people. An emphasis is often put on the distinction between the islands of Papua New Guinea and the Island of Melanesia which comprise of several archipelagos, islands, and reefs. The archipelagos include Louisiade, Bismarck, and Santa Cruz Island. Vanuatu consists of New Hebrides islands while New Caledonia consists of a larger island, as well as other smaller islands such as Loyalty Island. Fiji is also made up of main islands including Viti Levu and Vanua Levu, and several other smaller islands. The names of the Melanesian islands consist of both the indigenous and European names. Some islands on the western part of the New Guinea such as Halmahera, Alor, and Pantar are also included as part of the region. The Bismarck Archipelago consists of over 200 islands that are mostly volcanic including Admiralty, Mussau, and New Britain among others. The Solomon Island consist of almost 1,000 islands locates east of Papua Guinea. In addition to the mentioned islands, there are several other tiny islands and reefs in Melanesia including Norfolk, Rotuma, Trobriand, Woodlark, Raja Ampat, and Schouten Island among other islands.

Melanesia has been inhabited by humans for thousands of years. The first people to live on the Torres Strait Islands are thought to have come from Indonesian archipelagos over 70,000 years ago when the landmass of Australia still encompassed New Guinea. The first inhabitants of the New Guinea arrived in the region about 40,000 years ago where they invented the earliest known form of agriculture. The Maluku Island was occupied over 30,000 years ago while the Bismarck Archipelago and the Solomon Island was first occupied by the Polynesians in around 4000 BC. The European Explorers, mainly the Portuguese and the Spanish, made contact with several islands including New Guinea, Maluku, and Solomon Islands in the 6th century. The colonization of Melanesia by the European gathered pace in the late 18th century. The Dutch took control of the western part of the New Guinea in 1828 while the British took over the Southeastern part with Germany taking the northeastern part. New Caledonia was claimed by the French in 1853 while the UK declared a protectorate over the Southern Solomon in 1893. The World Wars I and II in the 20th century shifted the balance of foreign power in Melanesia with some of the islands including New Guinea becoming battlefields.

Independence became a major issue throughout the region after the end of the World Wars. Political leaders of the Islands discussed with their colonizers the possibility of independence. Several islands were granted independence including Fiji (1970), Papua New Guinea (1975), and Solomon Island which became self-governing in 1976 and fully independent in 1978. Full sovereignty was granted to the countries in 1980. The struggle for independence did not stop in the Melanesian countries who remained under foreign powers while poor systems of governance prevailed in the countries that had attained their independence. Currently, the politics of Fiji is in the context of a parliamentary representative democratic republic with the premier heading the government. New Caledonia’s political status is both that of an independent state and an overseas department of the French. The western portion of the island of New Guinea is part of Indonesia. The Maluku Islands are divided into two Indonesian provinces including Maluku and North Maluku. Vanuatu’s politics exists in the context of Republican political system with the president as the head while the premier supervises governmental activities. Most of the Melanesian countries are also members of the intergovernmental organizations.

The Economy Of Melanesia

The economy of Melanesia is primarily based on subsistence. Fiji is one of the most developed countries in the region since it is endowed with minerals, forests, and fish resources. New Caledonia is also endowed with minerals, particularly nickel. However, only a portion of New Caledonia’s land is fertile for agriculture. Papua New Guinea is rich with natural resources although the rugged terrain has hindered exploitation. Agriculture is the main source of livelihood in Papua Guinea with minerals such as copper and gold accounting for 70% of the export revenue. Western New Guinea is largely underdeveloped with the population dependent mainly on hunting, fishing, and subsistence farming. Solomon’s Island is also underdeveloped with more than 70% of the labor force employed in small-scale agriculture and fishing. Fishing is also a major source of livelihood in Torres Strait Island. The economy of Vanuatu is based on agriculture which is the main source of livelihood for about 70% of the population. Fishing and tourism are also important economic activities on the island.