Can Fiji Save the World? 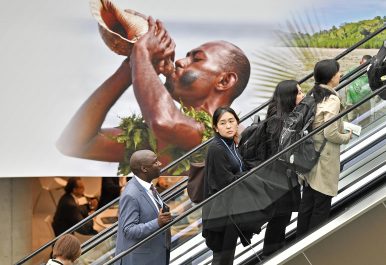 When Fiji’s Prime Minister Frank Bainimarama assumed the presidency of the 23rd meeting of the UN’s climate change convention on November 6, he was a long way from his Pacific home. Fiji is the first Pacific Island country to host a UN Conference of the Parties (COP), but is doing so remotely from Bonn, Germany.

With a population of less than one million people, Fiji has taken on an outsized role at the United Nations in recent years, becoming a much more prominent leader on climate change than many much larger countries.

Despite being held in a cold German city, COP 23 will have many Fijian touches. Fiji will lead a dialogue following the Pacific principles of “Talanoa” – sharing stories to build empathy and trust. Bainimarama also plans to delegate formal proceedings so that he can play “a roving role” and be on hand “to resolve any difficulties in the formal negotiations.”

Yet not all countries coming to the meeting are yet ready to climb into Fiji’s canoe.The Fiji police band will perform and a Fijian canoe, known as a drua, will sit in the main foyer of the meeting to remind delegates that “all 7.5 billion people on earth are in the same canoe.”

In particular, this year’s meeting will occur under the cloud of the Trump administration’s threatened withdrawal from the Paris Climate Change Agreement, just two years after the agreement was finally reached. It will contrast with the brief optimism around last year’s meeting in Marrakech, when countries were almost ready for the agreement to enter into force in December 2016.

That particular milestone was in no small part because Fiji had led a small group of countries eager for the agreement to be implemented as soon as possible. Fiji became the first country to officially join the agreement in April 2016, on the first day it was open for signing. These countries hoped to build momentum and avoid the delays that saw the Kyoto Protocol take more than 12 years to enter into force.

The United States’ planned withdrawal from the Paris Agreement will see it keeping company with only one other country, Syria. Every other country has signed the agreement, even North Korea.

Despite their small populations and economies, small island states like Fiji, have been among some of the biggest leaders on climate change at the United Nations. The impact of climate change on these countries with little protection from vast oceans is now well known.

Fiji is no stranger to some of the worst effects. Its coral reefs are dying, harming fishing and tourism, and salt water is rising, harming the nation’s second biggest export, sugar.

In February 2016, Cyclone Winston, the strongest storm to ever make landfall in the southern hemisphere, hit Fiji, killing 44 people and causing an estimated $1.4 billion in damage, around one-third of the country’s GDP.

The cyclone also prevented Fiji from hosting an Oceans Conference in June 2017. Damage from the cyclone saw the meeting relocated to New York.

The health of the world’s oceans, including the consequences of overfishing, has become another area where Fiji has shown leadership. Fiji’s Peter Thomson, until recently the 71st president of the UN General Assembly, is now the UN’s Special Envoy on Oceans.

All of these efforts have not come without cost to the small nation, still recovering from Cyclone Winston. The presidency of the General Assembly was in part funded by a trust fund set up after corruption plagued the office during Antigua’s recent presidency.

However Fiji’s small size means that it has also not received any of the economic benefits associated with hosting major international meetings. Last year’s COP brought around 20,000 people to Morocco, almost one quarter of the 80,000 tourists Fiji usually receives in a month.

With its white beaches and coral reefs, tourism remains Fiji’s biggest source of income, yet the COP will be held at the headquarters of the UN’s climate body the UNFCCC. Bainimarama has said that his country “simply could not have staged an event of this size and complexity in Fiji” describing it as an example of how countries of vastly different means can work together.

As a small country Fiji has to rely on building relationships with much bigger, richer countries if it plans to address climate change. Most small island states’ carbon emissions are negligible at the global level. Fiji is only responsible for 0.01 percent of global greenhouse gas emissions.

By contrast some of Fiji’s other neighbors, including Indonesia and Australia, have much higher emissions. Indonesia has particularly high emissions, partly due to peat fires used to clear land for palm oil plantations. Australia, meanwhile, is proceeding to build the Carmichael coal mine, a project of the Indian company Adani, which may potentially attract funding from China. It will be the biggest coal mine in the southern hemisphere, and will also potentially do further damage to the Great Barrier Reef.

China is now the world’s biggest emitter of carbon dioxide, although the United States remains the biggest emitter in history. Facing pressure over air pollution at home, the Chinese government has been taking strident steps to minimize fossil fuels within its own borders. However beyond its borders, China has been involved inan estimated 240 coal power stations in 25 countries through its Belt and Road initiative.

Alongside China, three of the other 10 biggest emitters – India, Japan, and Indonesia – are in Asia.

Ironically, there is a strong correlation between a country’s historic emissions and its ability to adapt to climate impacts due to poverty and lack of infrastructure. Alongside small island states, drought prone countries in Eastern Africa and river delta countries like Bangladesh are also vulnerable.

While small island states like Fiji have been among the countries most consistently sounding the alarm on climate change, the events of 2017 so far have shown that climate related disasters know no boundaries.

This year’s COP has been preceded by a year of unprecedented floods, hurricanes, and wildfires. A full one-quarter of all category five hurricanes to make landfall in the Atlantic Ocean since 1851 made landfall in 2017.

Bainimarama made his speech at the UN General Assembly in September just as Hurricane Maria tore through the Caribbean.  “The appalling suffering in the Caribbean and the U.S. reminds us all that there is no time to waste,” he told the assembly, also recalling the impact of Cyclone Winston on Fiji. “As incoming COP president, I am deeply conscious of the need to lead a global response to the underlying causes of these events.”

This consciousness, together with an understanding that Fiji and many of its closest neighbors simply will not survive unmitigated climate change will inform Fiji’s approach at the 23rd COP, which will run until November 17.

Lyndal Rowlands is a freelance Australian journalist and United Nations correspondent. She has written for Al Jazeera, the Saturday Paper and SciDev and is the former UN bureau chief for Inter Press Service.