A psychological approach to exploring the effects of colonialism among Filipinos

I was just in the Philippines recently, where I saw skin-whitening products and clinics everywhere! It is also where I saw the pervasive vestiges of western colonial influences, from the widespread use of English and the regard of it as the language of the educated or upper class, to the abundance of western restaurants and shops that make Manila seem more Americanized than many places in America itself. All of these, of course, are remnants of the Philippines’ long history of colonization under Spain and the United States. So colonialism, and its most insidious legacy, colonial mentality, has been on my mind.

And it seems like it has been on other Filipinos’ minds lately too. For instance, the viral AJ+ video featuring Kristian Kabuay shows that his quest to revive Baybayin is his attempt to restore and repair the immense cultural damages that colonialism brought onto Filipinos. Also, Asia Jackson’s viral AJ+ video on colorism and anti-dark skin attitudes among Filipinos touch on colonial mentality as well. And even further, I definitely made sure I brought up colonial mentality with major media executives and politicians while I was in the Philippines, so it was at least temporarily in their minds.

So yes, colonial mentality—particularly skin-whitening—has been on many Filipinos’ minds lately. But as Philippines Vice President Leny Robredo acknowledged when I asked her about it, it’s a centuries-old issue, and there’s been plenty of work on it, going as far back as Jose Rizal! Indeed, many folks have documented and shared their painful stories, struggles, confusions, and heartaches about colonial mentality throughout the years.

And over the past 15 years, there has been some efforts to quantify and “scientifically” capture colonial mentality among Filipinos. First, there’s the Colonial Mentality Scale (CMS), which is a typical questionnaire that directly asks people if they hold some signs of colonial mentality. The CMS asks people to indicate their level of agreement or disagreement with statements such as, “There are situations where I feel inferior because of my ethnic background,” “There are situations where I feel ashamed of my ethnic background,” "I would like to have a skin tone that is lighter than the skin tone I have," “I make fun of, tease, or bad mouth Filipinos who speak English with strong accents," and “Filipinos should be thankful to Spain and the United States for transforming the Filipino ways of life into a White/European American way of life." However, because people may easily lie, deny, or not know too much about their own attitudes and behaviors to accurately report it, I also developed the Colonial Mentality Implicit Association Test (CMIAT), which attempts to capture whether Filipinos have strongly and automatically associated Filipino culture with inferiority.

Although far from being complete and perfect, tools such as the CMS and CMIAT have allowed us to attach some “numbers” to the very real stories that people have been sharing for generations.

And so, what does the data tell us about colonial mentality among Filipinos?

Here’s an easily-accessible infographic summarizing some findings, and below it are a few more details: 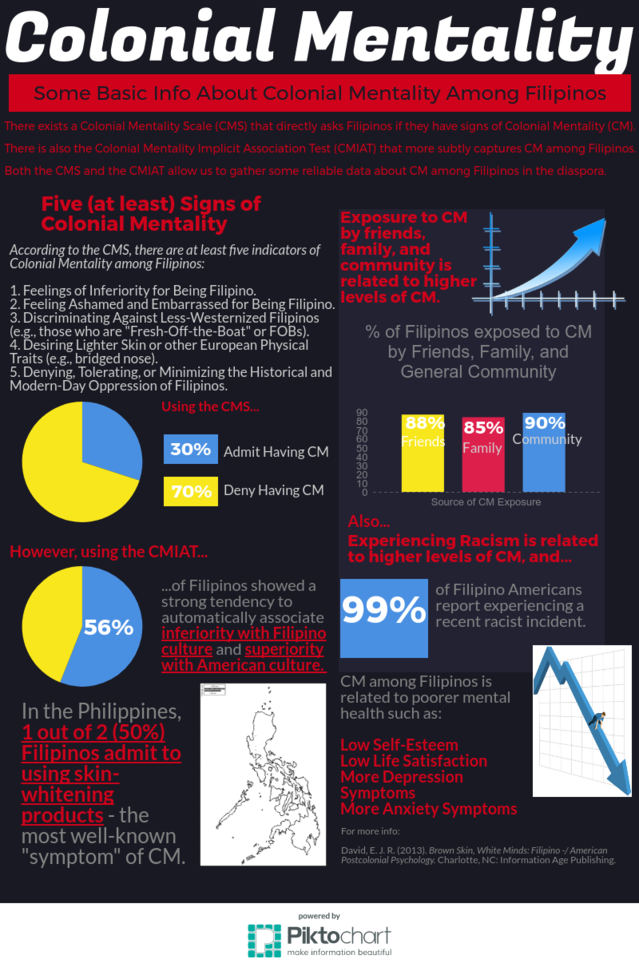