Length: [1081] words. Views: 7
Solomon Islands nationals traveling to Canada as part of the Foreign worker program or migrating under Permanent Residence nomination program from Guadalcanal Province, will be benefiting from a new partnership arrangement with Air Canada for their travel into Canada.
This partnership benefit will also be extended to any Solomon Islands province that is joining the education and training program offered by Canadian International Training & Education [CITREC].
The proposed route will be from Brisbane, Australia into Vancouver, Canada.
The arrangement becomes effective immediately and offers convenient travel for Solomon Islands nationals.
Air Canada is pleased to be able to support the Guadalcanal Province CITREC Graduates of the Solomon Islands and their Foreign Worker Migration program to Canada via Brisbane, Australia gateway which offers nonstop service to Vancouver and easy connections to the rest of Canada,” said Kevin Howlett, Senior Vice President Regional Markets & Government Relations.
"And we will soon add another year-round Australian gateway to our network with the addition of direct Melbourne service, adding to our ongoing flights from Sydney and Brisbane.
“With an unparalleled choice of 3 Australian gateways, we are delighted to be welcoming Solomon Island nationals on board Air Canada," Mr. Howlett said.
Guadalcanal Premier Honourable Anthony Veke has welcomed this opportunity.
"We welcome this opportunity with Canada's national airline Air Canada and the support this arrangement will be providing to people of my province and other Solomon Islands provinces in the very near future," Premier Hon. Veke said.
Premier Veke said that Air Canada has embarked on a venture where it is transporting Solomon Islands citizens to new opportunities.
"As Canada's national airline, Air Canada is flying my people to new heights. New heights of opportunity. It is helping make dreams come true and I thank every staff member and management of Air Canada for this opportunity.
“I look forward to my people from Guadalcanal, Solomon Islands experiencing Canadian hospitality on Air Canada flights very soon as we prepare a pool of people for Canadian job opportunities," Premier Veke said.
CITREC Chairman Mr. Ashwant Dwivedi has welcomed the partnership saying the Air Canada partnership will help further propel Solomon Islands partnership with Canadian's.
"This partnership will become a great convenience for people travelling into Canada under the arrangement. Air Canada being Canada's national airline has united families from across the world for many years.
“Now it is bringing the people of Solomon Islands into Canada. It is demonstrating its global commitment. This is a great achievement for our partnership with Canada and we look forward to growing this opportunity together with Air Canada," Mr. Dwivedi said.
"There is also cargo opportunity that we can discuss with Air Canada. There is great opportunity that this partnership brings with itself.
“Air Canada has Pacific reach and we can work in partnership with the airline to develop our export of goods and services from Solomon Islands into North America," Mr. Dwivedi who is also Solomon Islands Hon.Consul General to Canada said.
Air Canada is Canada's largest domestic and international airline serving more than 220 airports on six continents.  Canada's flagship carrier is among the 20 largest airlines in the world and in 2017 served close to 48 million customers.
Air Canada is also the first airline to voluntarily join the World Bank's IMF Carbon Pricing Leadership Coalition. Air Canada's efforts to be environmentally responsible – were recognized recently when Air Transport World named Air Canada Eco-Airline of the Year for 2018, global recognition that the airline says they are very proud of.
- CITREC Press 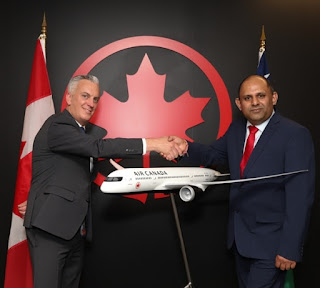