On a normal weekend, the waters of Kangava Bay would be busy with children playing or collecting clam shells and villagers heading out to catch reef fish to eat. But last Sunday the bay was quiet.

Locals can no longer cool off in the neon blue waters of Rennell Island, a tiny dot in the vast South Pacific that lies at the southern tip of the Solomon Islands. They can no longer spot parrotfish swimming in the shallows, picnic on the sand or fetch fresh water from streams and springs near the sea.

The reason lies just yards offshore. It is hard to miss. Four weeks ago the huge Hong Kong-flagged bulk carrier MV Solomon Trader, carrying 700 tonnes of oil, ran aground on Kongobainiu reef after becoming loosed from its mooring. Now dead fish float in the bay. The tide is black. A thick oily blanket of tar covers the surface of the water and coats beaches, rockpools, logs and leaves.

The coastal villages of Matanga, Vangu, Lavangu and Kangava have been the hardest hit by the oil spill. Paul Neil, who lives in Lavangu village, told the Guardian that children had been told not to swim in the sea and that fishing had been banned for the foreseeable future. With no way to find their own food, the villagers were now depending on deliveries from the capital Honiara, 150 miles away. Neil said the slick had changed the local way of life.

“Now we cannot use our sea and reef to do fishing and find shells to eat. We really suffered from it,” he said.

Steward Seuika, whose family live close to Kangava Bay, said residents had been forced to drink rainwater after fresh water collected from springs near the shore became contaminated with oil.

“The oil slick affects our corals and marine life. It also contaminates our water which comes out from the stones on the land near the beach. So now we run out of clean water to drink.”

As well as the food shortages, some locals have reported being burned after coming into contact with the oil while trying to clean it up. There were also reports that others were struggling to sleep because of the smell.

“Some people reported experiencing skin burns after the oil stuck on their body,” McQueen Bahenua, the provincial disaster officer, said.

The people of Rennell Island are accustomed to natural disasters. The remote atoll is regularly buffeted by cyclones and inundated by floods. But four weeks ago disaster came in a different guise.

In the early hours of 5 February, the seas were swelled by a cyclone, and the huge ship ran aground on Kongobainiu reef. The 225-metre long tanker had been loading bauxite from a nearby mine when it somehow was cast adrift.

One week after the ship ran around, the coral cut a gash on its side, spilling 80 tonnes of oil into the pristine waters of the bay. Now the slick extends for six kilometres. On Sunday, it could be seen spreading out from the stricken carrier, as if it was bleeding.

The authorities are scrambling to get to grips with what has become the biggest man-made disaster in the nation’s history. They are desperate to stem the flow of oil before it reaches the southernmost part of the island, known as East Rennell. The Unesco protected is home to the largest raised coral atoll in the world.

Among the villages and beyond, anger at the pace of the response from the shipping company and Solomon Islands government is mounting.

There have been reported frustrations that King Trader and its South Korean insurer, Korea P&I Club, are not moving fast enough to take responsibility. While the insurance company has engaged a salvage company in the Solomon Islands to secure and remove the ship, so far the bulk of the oil remains on board.

An investigation has also been launched into how the bulk carrier, chartered by Indonesian mining company Bintan Mining IC, was allowed to run aground.

King Trader and Korea P&I Club have apologised, describing the situation as “ totally unacceptable”. In a statement the companies said “although matters of liability are yet to be determined… [we] have expressed deep remorse”. The statement said they were “acutely aware of environmental damage” and were working as quickly as possible to bring the spill under control.

Aerial surveillance taken by the Australian Maritime Safety Authority has shown little progress on stopping oil leaking from the vessel. Experts say the clean-up operation could take months. But for residents of Rennell and its precious reefs, time is short.

The senior fisheries officer of Renbel province, Job Hukaoana, warns the bulk carrier must be removed quickly because low tides could cause further problems.

“If there is a low tide in the coming months, the carrier may capsize. If the bulk carrier capsizes in the sea, it will cause another huge man-made disaster.”

His frustration is echoed by neighbouring governments and conservation groups concerned at the pace of the clean-up. Australia’s high commissioner to the Solomon Islands, Roderick Brazier, says the spill is an “ecological disaster”.

In Kavanga Bay, residents are anxious for life to get back to normal and get back in the water.

But OceansWatch Solomon Islands spokesman Lawrence Nodua believes the situation is only going to get worse.

“The communities around Lughu Bay, with an estimated 300 people residing along the coast will not be able to have fresh fish for food for unknown length of time,” he says.

“It is only a matter of time before the oil reaches the world heritage area.” 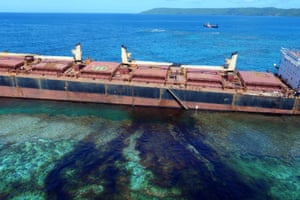