The office of Nei Tabera Ni Kai (NTK), a film unit based in the town of Taborio, in the small island nation of Kiribati, is a small concrete building situated two metres above sea level, 30 metres from the lagoon on one side and 45 metres from the ocean on the other. Stacked under the louvred glass windows of one of its small rooms are 200 internal hard drives taken from computers over a period of 20 years. The office has no air conditioning, and the air is salty; there are regular electricity blackouts; and higher than normal wave surges, or “king tides”, threaten the town – and the whole southern end of the atoll, South Tarawa, on which it is located – more frequently than they used to.

Once a Kiribati household name, NTK has not worked on major projects for a couple of years. One of the co-founders, John Anderson, cameraman and editor, passed away in 2016. His long-time partner, producer, manager and scriptwriter Linda Uan, has been dealing with the loss and reflecting on the best way to preserve their shared legacy.

The independent film unit documented more than two decades of culture, history, creative arts practice, development, and social, heritage and environmental issues across the islands. In the absence of a national film agency or television media, NTK managed to piece together various sources of funding to work with government and communities to produce educational documentaries, feature films and “edutainment”. Their output had a significant impact on the scattered Kiribati population – people from other islands travelled to South Tarawa by boat or canoe just to pick up the latest VHS, and later DVD, of their productions.

In March 2019, Uan attended the Maoriland Film Festival in Otaki, New Zealand. During a discussion panel, she spoke passionately about NTK’s work over the years. She ended with a humble request for assistance with archiving, taking one of those rectangular hard drives containing raw footage from her handbag and unwrapping it from a lavalava (sarong), then holding it up for the audience to see. The group of New Zealand and international filmmakers gasped at the condition of the drive, and the prospective loss of decades of visual chronicles, exposed to the elements in Kiribati.Loading

All but one of the 33 islands in Kiribati are less than two metres above sea level. Large parts of the country are expected to be under water by 2050. From 2003 to 2016 Kiribati was led by President Anote Tong, who successfully raised global awareness of the climate change threats faced by his country. At the United Nations Climate Change Conference in Bonn in 2017, Kiribati was described as one of the world’s most vulnerable countries.

Annual temperatures in South Tarawa have increased by roughly 0.18 degrees Celsius per decade since 1950, according to the conference’s briefing paper. This warming, coupled with increasingly ferocious tidal storms and coastal flooding, is destroying the island’s ecosystems.

Saltwater that floods the islands from storm surges devastates land and property, polluting reservoirs that capture and filter groundwater for consumption. Salt water also jeopardises resources such as coconuts, pandanus and breadfruit, which residents rely on for food and many other household needs.

In the Kiribati population, there has been a rise in waterborne diseases, among other climate-change-induced illnesses, including cholera and dengue fever. Warming oceans, combined with increased ocean acidification, disrupts sea life, which is the cornerstone of Kiribati identity and the country’s economy. Kiribati depends almost entirely on its fishing sector for food and revenue, but the catch potential is expected to decrease by 70 per cent by the 2050s.

Kiribati is one of 48 nations in the Climate Vulnerable Forum, a partnership of countries most under threat from global warming. These include Tuvalu, Palau, Papua New Guinea, Fiji, Vanuatu, Samoa and the Marshall Islands.

Kiribati once chaired the forum, and under Tong was a vocal proponent for limiting the temperature rise from global warming to 1.5 degrees Celsius. Beyond this temperature, sea levels are expected to increase to a point that would make Kiribati uninhabitable. Despite global campaigns calling for “1.5 to stay alive”, the Paris Agreement on Climate Change seeks to limit the temperature rise to 2 degrees Celsius. This is devastating for most Pacific island countries.

Anote Tong was vocal about the need for Kiribati to face climate-induced migration “with dignity”. However, the current government, led by Taneti Mamau, rejects this vision of mass migration, instead emphasising local development. The government aims to develop and increase the land area on South Tarawa by about 100 acres, and on Kiritimati (also known as Christmas Island) by 767 acres. It also owns 22 square kilometres of land on Vanua Levu in Fiji, with potential for forestry, livestock farming and other activities to shore up its food and economic security as Kiribati farmland comes under threat.

Reality too much for many to fathom

The level of carbon now in the atmosphere is more than 415 parts per million. The last time the Earth experienced these levels was during the Pliocene Epoch, between 5.3 and 2.5 million years ago. Then, global temperatures were 2 to 3 degrees Celsius higher, and the sea levels 25 metres higher. Pollution from climate change today is on track to push the Earth towards similar conditions. To many Australian voters, this reality is too much to fathom, presumed to be a hoax, or utterly unknown.

Prime Minister Scott Morrison might support climate adaptation and mitigation programs in the Pacific through his “Pacific step-up”, but he does not support similar domestic policies, such as increased research on climate change or the introduction of a carbon price, and Australia has no renewable energy targets beyond 2030. It is the world’s second-largest exporter of coal but faces falling demand as its biggest customers – Japan, South Korea, China, Taiwan and India – all shift towards cleaner energy. Burning coal is in Australia a bit like the right to bear arms in the United States: a freedom that causes major planetary harm, but the issue is severely politicised and many are not willing to imagine a future without it.

This protection of the mining industry is not new. For more than a century Australia has had a relationship with the South Pacific region that furthered its economic interests. Australian mining companies have been present in the Pacific since the beginning of the 20th century, wreaking havoc on ancient cultures and sustainable environmental practices while extracting phosphate as quickly as possible from places such as Nauru and Kiribati.

The value of phosphate, the superphosphate fertiliser it produced, and the growth effects it had on Australian farming production and exports were massive. In 1983 a monograph produced by the Centre for Resource and Environmental Studies described phosphate as “the magic dust of Australian agriculture”. In the case of Banaba, an island that forms part of Kiribati, the mining infrastructure was left to rust and decay. People there live among the asbestos-riddled rubble, in a place that looks more like a post-apocalyptic lunarscape than a Pacific paradise.

When Peter Dutton made his flippant aside in 2015 in response to a quip by Tony Abbott about how islanders are not good at keeping to time (Dutton said, “Time doesn’t mean anything when you’re about to have water lapping at your door”) Tony deBrum, the former foreign minister for the Marshall Islands, posted on Twitter, “Next time waves are battering my home & my grandkids are scared, I’ll ask Peter Dutton to come over, and we’ll see if he is still laughing.”

Former minister for the environment Melissa Price’s words to Tong were also offensive. When she was introduced to him in a Canberra restaurant, it was widely reported – and verified by others in the restaurant – that she said, “I know why you’re here. It is for the cash. For the Pacific it’s always about the cash. I have my chequebook here. How much do you want?”

That kind of attitude towards Pacific island leaders needs to change. Such leaders have been criticising the production and consumption of fossil fuels and their impacts on the environment for almost 30 years. The former Nauru ambassador to the United Nations, Marlene Moses, wrote in 2016, “For the people of small islands, understanding the importance of the ocean to human survival is as natural as breathing. If the ocean is healthy, we are healthy; if the future of the ocean is uncertain, so is ours.”

The Pacific islands may be smaller states demographically and geographically, but the sea in which they sit covers one-third of the planet’s surface area. Pacific leadership on climate change is necessary and inevitable.

Knowledge a source of resilience for 2000 years

Since 1997, Nei Tabera Ni Kai has produced more than 400 films in both English and the Kiribati language focused on Kiribati knowledge, lives, issues and communities. They have documented what residents call “te katei ni Kiribati” – the Kiribati way. Their work should be stored in a well-funded archive and maintained for posterity. The name of the unit comes from a female ancestral spirit belonging to Linda Uan’s clan, responsible for women’s health and success. Climate change threatens not only the lands of families and clans such as hers, but the spiritual and cultural spheres associated with these landscapes.

The knowledge inherent in these spheres has been the source of resilience for more than 2000 years in an oceanic environment with limited land, flora and fauna, allowing islanders not only to survive but to produce complex, creative societies.

Australia is now saturated with messages about the existential threat of climate change, but the impacts will cut across all dimensions of human existence – the social, the political, the cultural, the economic, the environmental, and everything else that shapes our identities and relationships.

Climate change is here today, not just in some distant future, and Pacific Islanders who cannot always crawl into air-conditioned, climate-controlled bubbles experience its effects on a daily basis. While the people of the Pacific are resilient and have survived centuries of upheaval, climate change is already at emergency levels in the region – representing some of the first and starkest signs of the greatest ecological threat to ever face humanity.

Katerina Teaiwa is an associate professor in the School of Culture, History and Language at the Australian National University. This is an edited extract of her essay "No Distant Future: Climate Change as an Existential Threat" published in Australian Foreign Affairs 6on July 15. 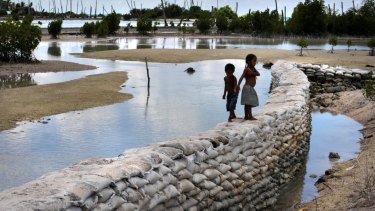